(The technology is in the developmental stage.) Leviathan has developed patented technologies that can release the potential of wave energy 4-5 times more cost-effectively than existing solutions being offered on the market. This market could potentially be more lucrative than wind as all other existing solutions are not very effective and the potential has hardly been tapped. 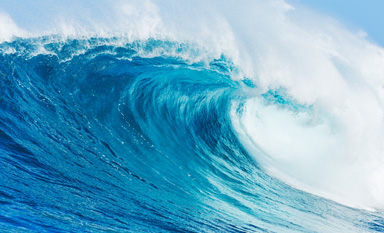 We change the paradigm of wave energy turbines and make a system that is 4-5 times more efficient than current systems and open up the market for wave energy worldwide. The potential market size is 2000 Terrawatt-hours/year or 10% of world electricity consumption.

We do this mostly by two major changes in how to obtain energy from waves. Both are based on the physics of waves. So far, this invention is protected by granted patents in the US, Japan, New Zealand, and Mexico.

1. Most current systems on the market use a bouncing buoy understanding of wave motion because they intend to take advantage of the apparent up and down motion of a wave. Wave motion is really rotational, but current systems don’t take full advantage of that simple fact because they only “see” the vertical motion. We capture rotational and vertical motion simultaneously.

2. Most of the wave is really buried beneath the surface. Other systems don’t take advantage of that. The soft spot for obtaining energy from a wave is just before it breaks, when it is the highest.
We create an artificial shoreline under the turbine.

We increase the energy flux of the waves by manipulating the conditions. This is based on Green’s Law. The expression for the wave speed in shallow water is (gh)1/2, where h is the undisturbed water depth and g = the acceleration of gravity. The speed of the top portion of the wave will be the largest. In shallow water, the amplitude increases as h^-1/4, where h is the local water depth. This
-1/4 law is referred to as Green’s law.

We apply Green’s Law of the amplitude of waves: Since most of the potential for amplitude is not seen at the deep-water surface, any technique that tries to harness the vertical motion of waves by simply placing a buoy in the ocean is inefficient. We expose that amplitude for energy capture.

The energy density (per unit area) of regular sinusoidal waves depends on the water density ρ, gravity acceleration g and the wave height h (which is equal to twice the amplitude, a):
E = 1/8 ρ g h^2

The point of the above equation is that most of the energy density is “lost” when the wave is partially buried beneath the surface. We make the energy easier to capture.